Oh hello there! My name is Christine and I am a 24 year old Pennsylvania native currently living in Jinju, South Korea.

My journey around the world began with the opportunity to travel as an exchange student to Germany through the German-American Partnership Program. Ever since, I’ve felt an overwhelming desire to see the world.

In 2016, I traveled to Ireland solo, only to meet some of the kindest, most inspiring people from all across America through EF College Break.

In the summer of 2018, I decided it was time to leave behind my home, sell my possessions, and pursue a new career as an English as a Foreign Language teacher in Korea.

To date, I have visited seven countries with the goal of visiting at least thirteen by the time I am thirty.

I hope you will join me on this journey as I grow as an individual, educator, and global citizen.

Thanks for stopping by! 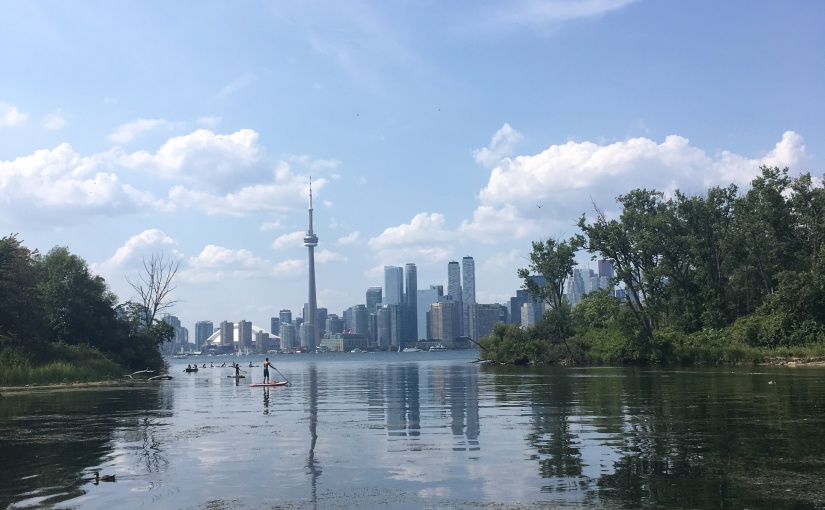 These past few weeks have been a whirlwind– of change, emotion, and packing. I think my best friend Hannah could tell that I was beginning to feel overwhelmed by how rapidly my life was moving and decided it was time for me to take a break. So when she texted me asking if I wanted to take a long weekend trip to Canada, I immediately said yes. I had never been to Canada, not even Niagara Falls, and I was itching to visit this northern country before I travel across the world. 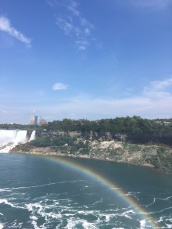 Our trip was pretty impulsive. We made the plans two days before we were slated to leave. We didn’t have hotels, we didn’t research what to do in Toronto, the city where we would be staying, and we didn’t have a set plan on when we would leave for Toronto and when we would head home, but that was okay. Amidst all the change taking place in my life, this impulsive, unplanned trip seemed completely sane. Besides, how hard could it be to find an affordable hotel for the day of in the middle of Toronto? (Very hard, the answer is very hard.)

Hannah and I left for Canada around 5:45 a.m. Our bags were packed and our bikes were strapped to the back of her car, ready to go. After a few rest stops and some bike mishaps along with way, we made it to Niagara Falls. It was one of the most beautiful things I have seen. The rush of the crystal blue water was both calming and alluring. Even in the blistering heat, I couldn’t help but smile.

Around 4:30, we decided it was time to book a hotel. We called every hostel listed in the city of Toronto, but all were booked; the prices of hotels were far outside of my budget. We were almost resigned to sleeping in the park, letting the mosquitos take us. But then, we found something else: a university residence hall turned hotel for the summer with hostel prices and available rooms right in downtown.

My weekend in Toronto may have been short, but I experienced so much in the two days I spent there. Not only did I experience Toronto nightlife, but I spent a day at the beach, ate at an Indian Food Festival, rode my bike throughout downtown and the financial district, visited Graffiti Alley, ate one of the most delicious vegan meals I have ever had, and met some pretty amazing people.

All these experiences offset any mishaps that we faced, like the Uber driver who almost refused to pick us up and then scolded me for slamming his car door, or the creepy middle-aged dudes who tried to pick us up at the bar. Or, worst of all, the sunburn I got from laying on a beach for hours.

There really is nothing like traveling to new places: experiencing the culture, interacting with the people, and taking in all the life around you. Spontaneous traveling is worth it, as long as you are traveling with someone who enjoys taking life as it comes, and who is open to trying new things. I wouldn’t have wanted to spend one of my last weekends in the United States any other way than seeing more of what this great big world has to offer.

I have always been a messy person. My entire life my bedroom floor has been littered with possessions: toys as a child, CD cases and clothing as a teenager, and now, as a young professional, the outfits I try on in the morning only to fling off immediately in order to try something else on. I always wondered why I couldn’t keep my room clean. My the cabinet under my bathroom sink is so difficult to navigate. Why I could not fit everything into my car when I moved out of my college dorm room and had to call for backup.

And then one day, while browsing the documentaries section on Netflix, I came across a film on minimalism. Minimalism has definitely been a buzzword over the past few years. Hell, even Emily Gilmore dabbled in minimalism, removing anything from her life that did not bring her joy after the passing of her husband.

I was inspired by these two young men, who spend their days traveling around the country to share the joys of minimalism with millions of Americans. But this documentary found me at the wrong time. I was out on the road, traveling for my job, and spending five nights a week at the Hampton Inn. There was no way I’d have time to really embrace minimalism. So I set it aside, and forgot about it until one day in Georgia.

I traveled to Georgia to see two old pals who I met in a hostel in Ireland. (You can read all about my travels to Georgia here!) I arrived at their beautiful, vibrant townhouse, and Mackenzie said to me, “You can have whatever you like! I’m trying minimalism.” and that’s when I was really struck by it. I saw how simple, but comfortable their home was. Her bedroom was nearly spotless, but also cozy and lived-in. That’s when I knew that the problem that had plagued me all my life was not a lack of self-discipline to put things away neatly (although that certainly doesn’t help), but owning too much stuff! So I ordered a book called The More of Less (yes, I bought something to help me own less, I recognize the irony), and set out to own less. 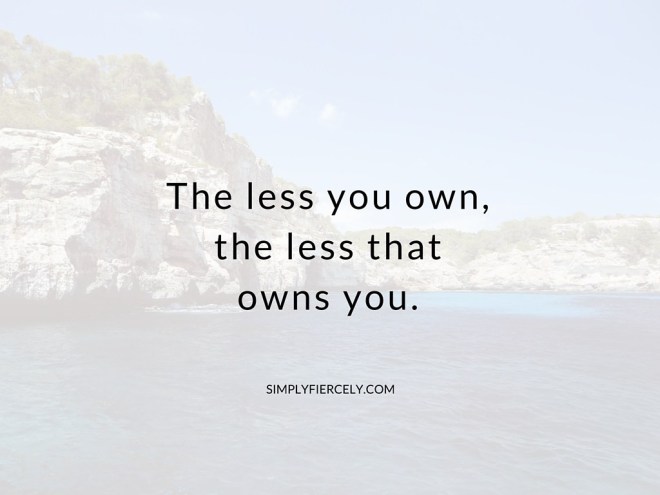 The first thing I tackled was my sock and underwear drawer. Getting rid of these types of textiles always plagued me with guilt. Most places do not accept donations of used socks or underwear (understandable). So instead, I’d wear these things under they no longer resembled the original product, all so I’d feel less guilty about them winding up in landfills. That’s when I discovered Planet Aid. They recycle and redistribute old clothing, even the clothing with holes and stains, even socks and underwear. When I learned that there is a Planet Aid donation bin just blocks from my apartment, I went from two drawers full of socks that could barely close to one that opens and closes with ease. I also cleaned out my pajama drawer, donating clothing I haven’t worn in months.

Another area I am trying to minimize is food. I’ve decided to challenge myself not to buy groceries, especially grains, pastas, and canned goods, until I run out of what I have in my pantry to use. I know this challenge will be a bit difficult as I follow a vegan diet and eat a lot of fresh produce. But even that I can work around. I have frozen vegetables in my freezer, canned goods in the pantry. While I prefer fresh produce, it is important to eat what I have before purchasing more.

While I am still working on my minimalist journey, I already feel rewarded. My surfaces are clearer, I don’t have excess of things I don’t need excess of, and I will be helping my future self by making my next move much more bearable. Not only that, but by choosing to live with less, I will also be taking a journey in better money management and spending my money on experiences I enjoy rather than on things that add little value to my life. Sure, I’m not where I want to be yet, but I know I will get there.

Life is an adventure. I didn’t always see it that way, and some days are harder than others, but after many years of struggling to see the sunny side of things, I am finally there. With my newfound joy comes many blessings. My mind it clearer and my words come easier.

Growing up, I never saw myself as a writer. I was just a reader. I carried a book with me wherever I went, eager to turn a page, devour a story, and make countless new friends I could always turn to just by turning a page. As I grew older, I longed to be the author of the story, but I so often found that the words did not come easily and the self-doubt quickly entered my mind. I wanted to believe I was talented, but the voice in my head told me to keep my words to myself, because they may not be good enough. Instead I hid my words away in journals. Beautiful, leatherbound journals, bright hardcover books with lined pages, full of untold stories just waiting to be told. And then one day, I took my words off of my own private pages and submitted to my college’s literary journal. A daring first. I didn’t expect to even be accepted. And then, to my great surprise, I won runner-up for a prose piece.

I cast off my doubt. I found my voice. 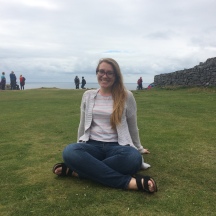 Finding one’s voice is never easy, but I hope with this blog I am able to open up my world, share my story, and keep the words flowing, an endless stream of ideas, of something to say, and of joy.

I hope you’ll join my on my journey through my young adult life. As I navigate this great wide somewhere and find my foothold, I hope that you’ll be by my side, cheering me on, offering advice, and celebrating my victories with me.

Follow me as I head out into the world, remembering that I am young, I am carefree, and I am living.